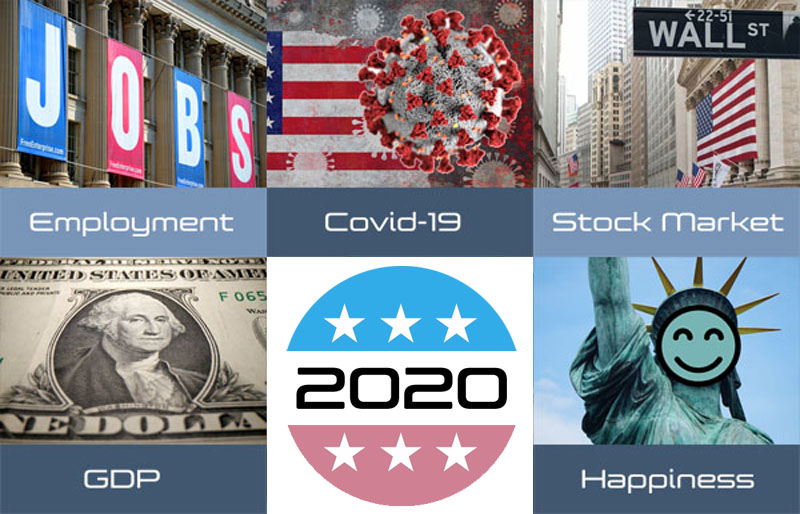 Hypermind is challenging its crowd of champion forecasters to predict some long-term consequences of the 2020 US presidential election.

Barack Obama said it first in 2010, then Donald Trump tweeted it right back in 2019: « Elections have consequences! » Wouldn’t it be great if we could precisely forecast those consequences before making a choice on election day? Hypermind’s Long Fork Project is designed to address this question with a ground-breaking long-term conditional crowd-forecasting challenge.

Until November 3, 2020, when U.S. voters will choose between Donald Trump and Joe Biden, we are aggregating the predictions of our crowd of champion forecasters about various U.S. socio-economic outcomes in 2022 and 2024 depending on who wins the election. Where would it actually make a difference if Trump or Biden is elected, and how much of a difference?

The resulting crowd-forecasts are updated daily until November 3, 2020 in this public dashboard: https://prod.hypermind.com/longfork/en/showcase/showcase.html

The best forecasters will share a $20,000 cash prize. We expect that when making their estimates, partisan biases should be considerably reduced because people are incentivized to forecast actual outcomes instead of just thinking wishfully.

If this experiment is successful – we’ll know in a few years! – it may pave the way towards making democracy smarter by evaluating public policy decisions against objectively crowd-forecasted outcomes, as Robin Hanson has proposed.

Hypermind has been at the forefront of prediction-market and crowd-forecasting R&D since 2000, and we have been involved in several multi-year IARPA research programs on crowd-forecasting over the last decade. Long-term conditional forecasting such as proposed by the Long Fork Project pushes the limits of a crowd’s otherwise well-documented ability to predict the future several weeks to months ahead. But several years? It’s never been tried before. It’s an ambitious challenge.

To paraphrase the immortal words of JFK rousing America to aim for the Moon, Hypermind forecasters are trying to predict these long-term outcomes not because it is easy but because it is hard, because this challenge will serve to organize and measure the best of our collective forecasting skill.