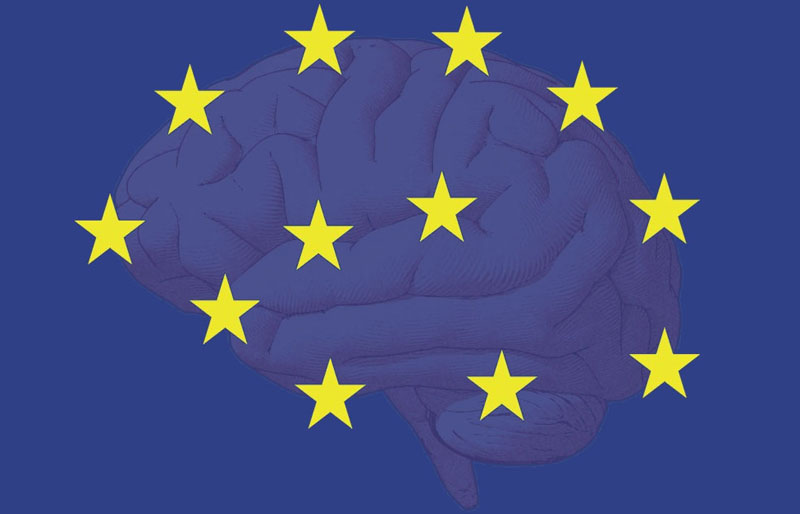 How to make Europe smart again

Europeans’ disappointment with their Union stems from its inability to solve persistent problems, among which uncontrolled immigration, weak growth, virulent populism, geopolitical insignificance, and climate change. Problem-solving ability is the hallmark of intelligence. So what would it take to raise Europe’s I.Q. ?

Unlike its economic and cultural challengers – China and the United States – the European Union is a particularly heterogenous bunch. It includes 28 sovereign member nations, 24 official languages, and population counts that vary from 82 million (Germany) to two hundred times less than that (Malta). While often praised as a blessing, this diversity is in reality experienced as a burden. The EU’s expansion, from six founding members in the 50’s to the current twenty eight, took a huge toll on its decision-making ability. Hence the calls from all sides to redesign the whole thing, or junk it.

Yet, if properly exploited, the diversity of the European collective could be its most formidable weapon in the global competition. The modern science of collective intelligence teaches us that the smartest groups are usually also the most diverse.

The diversity theorem, discovered by American social scientist Scott Page (*), proves that the intelligence of a group depends as much on the diversity of expressed opinions as on their individual shrewdness. An imprudent point of view can still be valuable if it contributes to the cognitive diversity within the group. This bedrock principle of crowd wisdom is counter-intuitive, but mathematical. When nobody can claim to master the complete picture, nor possess perfect reasoning ability, diversity lets the group process more information than any one participant could. It also helps neutralize each one’s intellectual errors and biases with the symmetrical errors and biases of others.

For this magic trick to work, the group should not so much seek consensus than divergent opinions, which must then be objectively combined, for instance through averaging, majority voting, or betting (as in a prediction market). The worst enemy of intelligence is not multitude but conformity. The surest ally of wisdom is not isolation but diversity.

Applied to Europe, the diversity theorem implies that the Union must cultivate national particularities rather than work to dampen them in search of harmony. It should not dread having to deal with diverse cultural and economic models, or even various levels of democratic maturity. If some nations seem less efficient, less equitable, less morally enlightened, or less democratic than others, it is worth remembering that they likely contribute nonetheless to the cognitive diversity that powers the intelligence of the Union as a whole. When no single nation can claim to be perfect, its shortcomings are counterbalanced, at the collective level, by the excesses of others.

Concretely, shouldn’t Europeans relish the opportunity to further grow the Union, for instance by including Serbia, if the diversity bonus would help make it smarter? Conversely, shouldn’t they deplore the intellectual impoverishment that will result from Brexit? Shouldn’t they be wary of the unintended groupthink consequence of a “multi-speed” EU that would allow cliques of like-minded nations to downgrade the diversity of viewpoints necessary to wise decisions?

The appeal of a multi-speed union is fueled by frustration with the rule of unanimity that often paralyses or weakens European decision making. To fully exploit the great potential of the EU’s diversity, the rule of unanimity should be replaced by qualified majority votes. Paradoxically, a rule that was meant to protect diversity among nations by preventing the tyranny of the majority ended up preventing the EU from tapping that diversity to unleash its collective intelligence.

The other great discovery about collective intelligence is that the smartest groups are those where speaking time is evenly distributed, and whose members score best on tests of empathy.  While testing hundreds of groups ten years ago, scientists from Carnegie Mellon and MIT (**) discovered that the collective I.Q. depends less on individual smarts than on the proportion of women in the group, precisely because women, on average, are better listeners and more empathetic souls. The quality of the communication among group members is more important than their sheer individual brain power. Much like the internet whose value depends more on the size of the bandwidth than on the speed of the computers connected to it.

Within the EU, the lack of empathy is most glaring at the popular level. What does the average French citizen know about the average Pole, Hungarian, Dutch or Greek? Essentially nothing. Schoolbooks reduce European history to bloody conflicts among neighbors. Even during the European elections campaign season, national media give insignificant airtime to neighboring voices. National narcissism is the rule, concern for others across the border the exception. Tonight the French TV news will more likely feature a road accident in Brittany than allude to a major cultural debate in Germany.

Despite the many EU policies already aimed at facilitating exchanges – including the Euro, borderless travel, and the various norms that make the common market possible – the actual bandwidth among European people remains painfully narrow. All initiatives that widen it would contribute to a more intelligent Union. This may argue in favor of currently controversial proposals for a compulsory European civic service, or even a European army. Conversely, any policy aimed at reducing people-to-people interactions – like abandoning the single currency, or reinstating national borders – is bound to dumb the Union down, mechanically.

Language is the biggest barrier to communication amongst Europeans. It is natural and desirable – diversité oblige – that each people should want to preserve and sustain its language and the culture that flows through it. Yet, for Europeans to be able to talk to, listen to, and read each other, they would need to agree on a second language common to all. Brexit or not, English would seem to be the best candidate, for it is already the language of choice for science, business and travel. Thus could Europe pay an elegant tribute to heroic blood and generous treasure that English-speaking people contributed towards its peace and prosperity during and since the second world war. Making everyone fluent in English, in addition to their native language, could be a worthy European priority.

It is also unfortunate that in European elections, the only continent-wide citizen consultation, voters in each country can only choose among fellow countrymen (and women). This does not encourage candidates to engage with people in other countries, and neither does it encourage voters to consider foreign political ideas or talent. It has been proposed that a delegation of parliamentarians be elected by all Europeans on transnational lists. This could help increase political empathy amongst people and nations.

The European Union is a grand collective experiment. Its particular strengths lie in the number and diversity of its people. Its success in the global competition will depend as much, perhaps more, on its ability to tap a unique collective-intelligence potential as on the size of its investments in artificial intelligence (where it will never rival the U.S. or China).

Just as neuroscience informs our educational methods, the modern scientific understanding of collective intelligence could guide the next phase of the EU’s work in progress. European policy proposals should henceforth be evaluated against the imperatives of diversity and empathy that are necessary to the collective I.Q..

It wasn’t so long ago that European reason illuminated  the world. Let’s make Europe smart again!

Next PostUM6P School of Collective Intelligence
Partager sur
Contact us